You are here: Home / Movie review / Who Has the Best Voice @Fandango Movie? The Voice The Voice It’s all About the Voice #Fandango #MonstersUPremiere

I’m a contributor to Fandango’s Family Room. This post was originally published over on Fandango’s Family Room” as part of their Ambassador campaign. I love watching movies and enjoy going to the theater whenever possible. Now that the kids are getting older we’re starting to get back to the theater and I’m up on the latest movies. Kids movies more than anything and with the help of some friends on Facebook I came up with this list of voices that make the movie!

When watching animation, CGI, stop-motion — what ever it may be — the feeling of the character comes through the voice. And it’s a complicated process, even though you may think it’s all about reading from a script. I’ve actually had the chance to do a voiceover for two different movies (no, it wasn’t put in the movie, but just for the experience!). I voiced Piglet from the newest version of Winnie the Pooh, and then I also voiced Vanellope Von Sweets in Wreck-It Ralph. It’s amazing to be in the studio and learn that the actors have to do so many different inflections to really get into the part. So who does a great job? 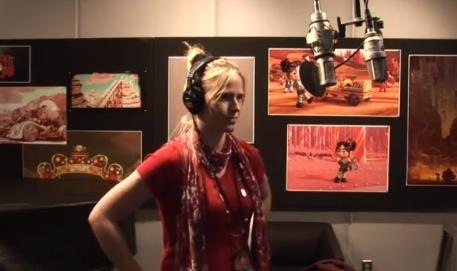 Well, I really did love Sarah Silverman in Wreck-It Ralph. She was such a spoiled brat, and it was cute and disgusting at the same time. I mean, I wanted to slap Vanellope all the way from my seat, yet I felt bad for her plight. I also really love listening to Larry the Cable Guy as Mater in Cars and Cars 2. Larry the Cable Guy seems to be the same person offscreen as he is as Mater. He’s all country, guts and fun loving. He is so easy to love as a character and I so enjoy that.

Thinking of other actors I love behind the magic of animation, I must include Billy Crystal and John Goodman. I love Billy as Mike in Monsters Inc. He’s constantly making sarcastic remarks and I can’t wait to see him and John re-create their characters in Monsters University on June 21. I’ve gotten to see the first 40 minutes of the movie already and it had me laughing pretty hard. The banter between Mike and Sulley cracked me up.

Other favorites include Queen Latifah, John Leguizamo and Ray Romano in Ice Age; they make quite the trio. What really draws me to an animated voice is the humor they can bring to a film. Robin Williams in Aladdin will always be one of my favorites. You just can’t picture the Genie as anyone else, can you?

Movies coming out this summer will be bringing the voices of Steve Carell, Kristen Wiig and Ken Jeong to the big screen in Despicable Me 2 and the voices of Ryan Reynolds, Paul Giamatti, Maya Rudolph and Samuel L. Jackson in Turbo, plus the voices of Val Kilmer, Julia Louis-Dreyfus, Dane Cook and Carlos Alazraqui in Planes. It’s going to be a packed summer that my kids and I are looking forward to.

Thank you to our partner EaseUS for sponsoring this post! Now that so much of … END_OF_DOCUMENT_TOKEN_TO_BE_REPLACED

Thank you to our partner Skoove for sponsoring this post! My husband is a … END_OF_DOCUMENT_TOKEN_TO_BE_REPLACED

This is a sponsored guest post. As moms, for sure, many of you can relate to … END_OF_DOCUMENT_TOKEN_TO_BE_REPLACED

Thanks to VIZIO for providing their M-Series 65” SmartCast TV for review! Our … END_OF_DOCUMENT_TOKEN_TO_BE_REPLACED

Product sample provided. This is a guest post by Natasha Hendrix, Customer … END_OF_DOCUMENT_TOKEN_TO_BE_REPLACED

This is a sponsored guest post. As we move into a more digital age, we find … END_OF_DOCUMENT_TOKEN_TO_BE_REPLACED

This is a sponsored guest post. Last year a 16-year-old from Pennsylvania … END_OF_DOCUMENT_TOKEN_TO_BE_REPLACED