You are here: Home / giveaway / The Madeline Movie: Lost In Paris Giveaway

She’s captured millions of hearts and been adored by every generation — now Madeline stars in her first animated feature! Inspired by the beloved classic books that introduced us to a dozen delightful girls who live in an old house in Paris covered with vines, The Madeline Movie: Lost In Paris is full of spirited fun and five "fantastique" new songs.

When a long-lost uncle from Vienna pays a surprise visit, Madeline’s dreams of family life seem wonderfully fulfilled — until she finds herself in the middle of an unfortunate scheme. Madeline then must call upon all of her courage and cleverness to foil an evil plot to take her from the only family she’s ever known. Join Madeline, Miss Clavel, Pepito, 11 school friends, and her ever-so-smart dog, Genevieve, in a thrilling Paris adventure you won’t want to miss, where everyone learns the true meaning of family! 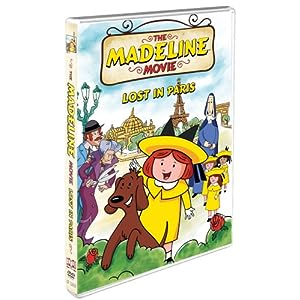 My kids prefer Ben 10 over Madeline, not sure why, maybe it’s because of all the action and colors in Ben 10; but they still watch it and ask me what is going on. Madeline is the story of a girl that is living with a bunch of other girls dreams of having a family. Then all the sudden her lone lost uncles shows up. It’s a story I recognize but placed into a cartoon. This uncle tricks Madeline into coming with him and then reveals that he is not really her uncle and dumps her off to do work for a nasty woman who treats children as slaves.

Miss Clavels discovers the plot and finds Madeline and reunites her with all of the other girls. Her friends, Her family. It’s a very cute story of love and friendship. I liked it and I hope that you will too.

I have two copies to giveaway.

When did you first learn about Madeline?

Advertise this giveaway on any giveaway site, your blog, or your facebook page and tell me where you advertised it (include link to giveaway). 5 Extra Entries for each one you do
Subscribe to my blog
Comment on any other non-giveaway post
Use any of the share options below, digg, stumble…2 entries each

The contest will run until April 12th 11:59 pm Pacific. All rules can be found under giveaway rules.

Thank you to our partner EaseUS for sponsoring this post! Now that so much of … END_OF_DOCUMENT_TOKEN_TO_BE_REPLACED

Thank you to our partner Skoove for sponsoring this post! My husband is a … END_OF_DOCUMENT_TOKEN_TO_BE_REPLACED

This is a sponsored guest post. As moms, for sure, many of you can relate to … END_OF_DOCUMENT_TOKEN_TO_BE_REPLACED

Thanks to VIZIO for providing their M-Series 65” SmartCast TV for review! Our … END_OF_DOCUMENT_TOKEN_TO_BE_REPLACED

Product sample provided. This is a guest post by Natasha Hendrix, Customer … END_OF_DOCUMENT_TOKEN_TO_BE_REPLACED

This is a sponsored guest post. As we move into a more digital age, we find … END_OF_DOCUMENT_TOKEN_TO_BE_REPLACED

This is a sponsored guest post. Last year a 16-year-old from Pennsylvania … END_OF_DOCUMENT_TOKEN_TO_BE_REPLACED