You are here: Home / review / The Invention of Lying

Could you imagine a world where there are no lying. Not only no lying but you say whatever is on your mind. Ha! I could not live in a world like that. I mean, I suppose If I was raised with the complete truth, even hurtful truth then I could deal with it. Watching a world like this was the funniest thing I’ve seen in months.

The Invention of Lying was so funny from the beginning to end. It was just released to DVD on January 19, 2010. 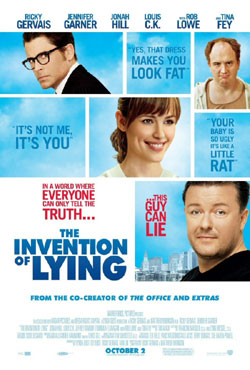 The movie began with talk of “personal time” in Anna’s (Jennifer Garner) apartment. I was thinking that the entire movie was going to be dirty but it cleaned up and was just funny. Mark (Ricky Garvais) discovered that he could lie. He even tried to teach his friends but they never caught on to the fact that he was lying. They believed it every time he told them his name was something different. Mark is quite a decent guy, because he told a woman that the world was going to end if they didn’t sleep together and then he realized how wrong it was to take advantage of her so he pretended that NASA called him to say it was cancelled.

When his mother dies, he invents the man in the sky and then there is a lot of humor about the rules from the man in the sky. Between these rules being announced and Mark’s ability to lie he becomes rich and famous. But even with his fame he is still unable to win the love of his life’s heart. She thinks he’s too fat and has a snubby nose. But it doesn’t end there.

The line up of actors was amazing. I love Tina Fey, Rob Low and Jennifer Garner is always fabulous.

Warner Brothers sent me this DVD to review, no other compensation was received.

Interior Design – Decorating my Son’s room with The Studio Danielson Designs
Would You Take A Walk In My Shoes with Walmart and P&G
Pinch Me! I Must Be Dreaming. #PINCHmeNYFW
Tweet
Share
Stumble
Pin
+1
Share
Shares 0

This is a sponsored guest post. As moms, for sure, many of you can relate to … END_OF_DOCUMENT_TOKEN_TO_BE_REPLACED

Thanks to VIZIO for providing their M-Series 65” SmartCast TV for review! Our … END_OF_DOCUMENT_TOKEN_TO_BE_REPLACED

Product sample provided. This is a guest post by Natasha Hendrix, Customer … END_OF_DOCUMENT_TOKEN_TO_BE_REPLACED

This is a sponsored guest post. As we move into a more digital age, we find … END_OF_DOCUMENT_TOKEN_TO_BE_REPLACED

This is a sponsored guest post. Last year a 16-year-old from Pennsylvania … END_OF_DOCUMENT_TOKEN_TO_BE_REPLACED