You are here: Home / Archives for Weather Kid Sid

I love to watch TV and yes I am so guilty of letting my kids watch too much TV, but most of it is really good for them. They learn so much from some of the programming. Zoe knows her alphabet and we’re working on lower case letters now. Some of that reinforcement comes from TV. Check out a few of our favorites here: 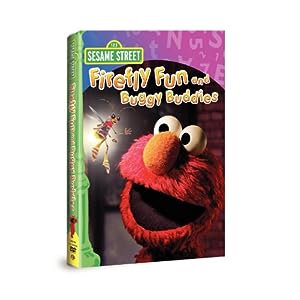 Warner Brothers is a publisher for Sesame Street DVD’s and they sent me a copy of Firefly Fun and Buggy Buddies to review. We watch this episode all the time, it is one of the episodes we recorded before we turned our cable off. So we have Elmo’s World Bugs, Slimey’s Pet Bug Dirty, and Fly, Little Firefly! We like to sing this song and pretend that we are little Fireflies right along with Telly Monster and Baby Bear.

This DVD is all about bugs. Telly and Baby bear try to figure out how to catch a firefly. But once they do, they see that the firefly was sad. So they had to pretend to be fireflies to understand that the firefly was unhappy with the small amount of space he was stuck in.

You know how Oscar has a pet worm? The worm Slimey wanted to get a pet, so Oscar takes him pet shopping. They then pick out a bug and have to learn how to take care of a pet together. 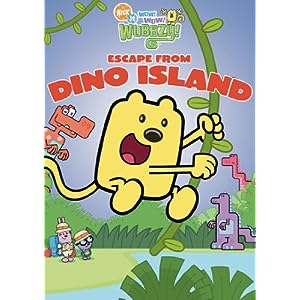 Nick Junior sent us Wow Wow Wubbzy newest adventure on DVD; Escape from Dino Island. Wubbzy is a cute and quirky bendy-tailed character  that takes viewers on many adventures in the brand-new DVD, “Escape From Dino Island.”  Whether it’s exploring the jungle, swinging from vines or “discovering” friendly new creatures, you will find here.

“We are very excited to bring ‘Escape From Dino Island,’ to DVD as the newest title in our collection of award-winning Wow! Wow! Wubbzy! releases,” said Julie Cartwright, SVP of Brand Marketing for Anchor Bay Entertainment.  “Preschoolers and families nationwide will dig the dinosaur-themed entertainment that is sure to bring laughs to the youngest set, while imparting important life lessons about honesty, teamwork and more!”

In Escape form Dino Island has six episodes and a bonus episode making seven total episodes for your preschooler to watch, and if they are anything like the two of mine then they will love Wubbzy in Escape from Dino Island. Start off with the adventure Escape From Dino Island, Then you’ll find Wubbzy The Hero, Call of the Mild, Wubbzy and the Sparkle Stone, Daizy’s Purple Thumb and Mt. Fizzy Pop. Then the final episode is Too Much of a Doodle Thing.

Also a star on the Internet, Wow! Wow! Wubbzy! remains the top game for the past two years on Nick Jr. ®’s award-winning website (www.nickjr.com) and boasts the first-ever video podcasts for preschoolers at www.wubbzy.com.

NCircle Entertainment and PBS sent me a copy of Sid the Science Kid Weather Kid Sid to review with my family.Sid the Science Kid is about Sid and his friends and the discoveries they make at school. They have science lessons every day, as they sing, play and interact with one another just like children do every day. The feel of the show is so natural, every day Sid gets up, struggles to get his breakfast eaten, goes off to school and plays with his friends. He occasionally has a play date after school with his best friend Gabriela. Gabriela is my daughter’s favorite character because of the pigtails, but she is also partial to May and her purple hair.

Weather Kid Sid has four episodes with the first episode introducing the rain. They learned all about how the rain helps things to grow, and that it doesn’t just rain to ruin play dates.  Another episode was about spending the day with his dad out in the sun. Sid was protesting the sun block, the same way mine did, but he learned all about why it was necessary to put on sun block.

What is your kid’s favorite TV Show?

The contest will run until May 31st 11:59 pm Pacific. All rules can be found under giveaway rules.

All of the DVD’s above were sent to us for free to review from the companies listed.

Disclaimer: Compensation was provided by Amwell via Momtrends. The opinions … END_OF_DOCUMENT_TOKEN_TO_BE_REPLACED

Thank you to our partners who have sponsored our 2020 Tech The Halls Gift Guide! … END_OF_DOCUMENT_TOKEN_TO_BE_REPLACED

Thank you to our partner EaseUS for sponsoring this post! Now that so much of … END_OF_DOCUMENT_TOKEN_TO_BE_REPLACED

Thank you to our partner Skoove for sponsoring this post! My husband is a … END_OF_DOCUMENT_TOKEN_TO_BE_REPLACED

This is a sponsored guest post. As moms, for sure, many of you can relate to … END_OF_DOCUMENT_TOKEN_TO_BE_REPLACED

Thanks to VIZIO for providing their M-Series 65” SmartCast TV for review! Our … END_OF_DOCUMENT_TOKEN_TO_BE_REPLACED

Product sample provided. This is a guest post by Natasha Hendrix, Customer … END_OF_DOCUMENT_TOKEN_TO_BE_REPLACED

This is a sponsored guest post. As we move into a more digital age, we find … END_OF_DOCUMENT_TOKEN_TO_BE_REPLACED