You are here: Home / Archives for The Movie

Do you remember awhile back I went on some secret mission in Atlanta? Well, I can FINALLY tell you what it was for!

There is an amazing movie coming out based on the international bestseller with the same title. The cast of What to Expect When You’re Expecting alone will blow you away: Cameron Diaz, Jennifer Lopez, Elizabeth Banks, Chace Crawford, Brooklyn Decker, Anna Kendrick, Matthew Morrison, Dennis Quaid, Chris Rock, Rodrigo Santoro, Ben Falcone and Joe Manganiello. See? Pretty impressive, right? You may wonder how such an information filled text can become a comedy. Well, if you know anything about pregnancy, people, or life in general, the transition is actual pretty natural! The movie follows the lives of several different couples (including reality TV stars, food truck rivals, and an older man with a “trophy wife”) through the trials, challenges, triumphs and smiles that happen as you welcome a child into the world. This star-studded cast makes this film a heartwarming comedy that is universally funny and touching all at the same time. Just watching the trailer (which has recently been released – YAY!) cracks me up!

Look for more coming soon to MomStart about What to Expect When You’re Expecting (coming to theatres in 2012). 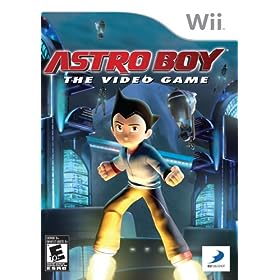 You know what I like about Astro Boy? He has a shirt on, all of the older versions of Astro Boy he is shirtless and now he is sporting a jacket and shirt. Very funny I know.

This was another one of the games that they demoed at the Family Event hosted by D3 Publisher. My husband is interested in trying out the game on the Wii. I think he spent more time watching the demo as it was one of the last things we did that day. I was so tired.

I know that it is side screen scrolling and that you rotate between flying and land levels. You fight bad guys by shooting, out the front and the rear. One of the favorite lines from the movie is “I have guns in my butt?” or something along those lines.

When the futuristic Metro City finds itself facing new and unprecedented peril, there’s only one figure to whom it can turn: Astro Boy. The creation of a brilliant scientist, this daring young robot is imbued with a variety of amazing powers, from lasers and arm cannons to super speed and flight. Now he must prepare to face his destiny, summoning all of his powers in defense of everything he holds dear.

You can also look here for my Astro Boy Movie Review.

Synopsis
Enter the world of the exciting CG-animated film with Astro Boy: The Video Game. Experience the world of this intrepid young hero as you wield amazing powers to battle hordes of enemies and gargantuan bosses. Using your super strength, flight, drill attacks and more, you’ll propel your way through an exhilarating platforming adventure filled with gorgeous graphics and compelling action. Will your efforts be enough to save the denizens of Metro City and help you become the hero you were meant to be?

Tell me who your going to give this to, it’s ok if it’s for you.

Advertise this giveaway on any giveaway site and tell me where you advertised it. 10 Extra Entries
Subscribe to my blog
Follow me on twitter tell me your twitter ID
Blog about the giveaway include a link to me and to the sponsor for 10 extra entries
Tweet the giveaway (every time you tweet you get an entry) Link to the giveaway please!!!
Comment on any other non giveaway post and come back and tell me you did
Use any of the Share options at the bottom of this post: Dig, Stumble, or fav me on Technorati (two entries for each one)
Add my button/blog to your blogroll/friend list 3 extra entries
You can vote for me too for five entries:

The contest will run until November 23rd 11:59 pm Pacific. The winner will be selected by www.random.org

D3 did not pay me for this post but they did provide my family a vacation.

Disclaimer: Compensation was provided by Amwell via Momtrends. The opinions … END_OF_DOCUMENT_TOKEN_TO_BE_REPLACED

Thank you to our partners who have sponsored our 2020 Tech The Halls Gift Guide! … END_OF_DOCUMENT_TOKEN_TO_BE_REPLACED

Thank you to our partner EaseUS for sponsoring this post! Now that so much of … END_OF_DOCUMENT_TOKEN_TO_BE_REPLACED

Thank you to our partner Skoove for sponsoring this post! My husband is a … END_OF_DOCUMENT_TOKEN_TO_BE_REPLACED

This is a sponsored guest post. As moms, for sure, many of you can relate to … END_OF_DOCUMENT_TOKEN_TO_BE_REPLACED

Thanks to VIZIO for providing their M-Series 65” SmartCast TV for review! Our … END_OF_DOCUMENT_TOKEN_TO_BE_REPLACED

Product sample provided. This is a guest post by Natasha Hendrix, Customer … END_OF_DOCUMENT_TOKEN_TO_BE_REPLACED

This is a sponsored guest post. As we move into a more digital age, we find … END_OF_DOCUMENT_TOKEN_TO_BE_REPLACED