You are here: Home / Archives for science fiction

I saw this on Facebook, my SIL liked it and posted it on her page and I just LOVED it. I’m such a geek for Doctor Who! We even started watching Doctor Who from the very from the very beginning on Amazon Prime with 15 minute episodes that take an entire season to get through one story line. The 1963 Doctor played by William Hartnell was the very first Doctor. We loved how the music is pretty much the same, it’s just been updated a little bit.

Then watching old fashion Doctor Who led to our Star Trek original series addiction. We took a break in Star Trek to watch part two of Season Six part 2 of Doctor Who for BBC. So in all my geekiness, I present the Timeline of Doctor Who!

Who is your favorite Doctor Who?

I’ve always been a fan of imaginative worlds that might have existed once upon a time; legends. Legends and folklore captivate my attention and one of the best legends around is the story of Camelot, King Arthur and the nights of the round table. Merlin a BBC America production has been viewable in America on one of my favorite channels, ScyFy. Merlin the Complete Second Season became available on DVD January 18th.

Merlin is about the forging of a strong relationship between the future King Arthur and his servant the warlock Merlin. In a land where magic is strictly prohibited, Merlin secretly uses it every day to protect the future of Camelot and his best friend Arthur. I watched Season Two and loved it! I was so happy to see the Lady Morgana finally embrace her path to the dark side. She is completely evil now in Season 3, oh wait, I’m getting ahead of myself but I can’t help myself because she is one of my favorite characters.

You’ll find that I enjoyed Merlin the Complete Second Season so much that I had an extremely difficult time waiting for Season 3 to begin. I know Merlin felt like he really couldn’t trust Morgana, but I almost feel that if he would have shared his secret with her, he would have saved the whole kingdom a lot of trouble. Just my 2 random cents there!!

Synopsis: Merlin is back with even more magic, adventure and romance as the young wizard struggles to protect Prince Arthur in the perilous world of Camelot. While battling deadly assassins, mystical monsters and the most powerful sorcerers Camelot has ever seen, Merlin must work harder than ever to conceal his unique abilities, as King Uther redoubles his war against magic. And Merlin isn’t the only one whose destiny calls—Lady Morgana , Uther’s ward, discovers dangerous secrets she dare not reveal; Lancelot returns, changing everything for both Gwen and Arthur; and King Uther fall in love, little knowing that the charming Lady Catrina is secretly a hideous troll. And as Arthur continues on his path from arrogant prince to the noble and just King Arthur of legend, we see the return of the one prophesized to kill him—the mysterious druid boy, Mordred. Featuring exciting new villains, white-knuckle stunt sequences, and spectacular CGI monsters, Merlin season two is more thrilling than ever.

I received a copy of Merlin The Complete Second Season from BBC for my unbiased review.

I finished this book, and that’s saying a lot when it comes to a book review that I’m doing on my blog. I get book offers all the time. I used to accept all of them but then I felt like I was doing a disservice to the author and the publisher by doing a piss pore job. So when Bound to Shadows showed up on my doorstep I vowed to read it. It sat and sat and finally I purchased it on my Kindle, then the reading began. 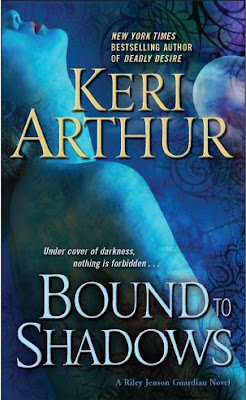 This books is a paranormal romance novel, also known in my world as sci-fi smut. Sex, intrigue and gore! Oh no, this is another embarrassing fact I’m admitting about myself, yes I know you know that I love science fiction but did you know that I like smut?

Riley is the books main character. She is part werewolf part vampire and all about getting it on with someone else even though she’s trying desperately to hold onto a relationship with the love of her life. While I was reading this book I didn’t realize that it was the 8th book in a series. I wish I had known so I could have started at the beginning. Except for the fact that I have a due date for the review (I’m sure it’s overdue).

Of course that deserves more explanation and I have a feeling a lot of the explanation was at the beginning of the series when the character development would have been longer. For the first third of the book I was trying to figure out who was whom and why were they important to Riley.

Keri Arthur seems to stick to the normal rules of vampires. The sun burns them so they are mostly only out at night, and I have no idea what sticks to werewolves but apparently they are addicted to the hot and heavy if you know what I mean.

Riley is like a policeman for the non-humans in that she takes care of humans and non-humans rights. She polices their problems and hatred for one another and solves murder cases. So really she’s more like a super detective. This book solves one heck of a murder mystery and a love triangle of her two halves. Each being in her craves someone else but in the end she makes the right choice.

I love everything vampires so I had to give this a try. I’m glad that I toughed out the first part trying to get to know each of the characters because from the middle on I couldn’t put the book down.

As Riley becomes absorbed in the grotesque human beheadings and a sketchy club owner/murder-suspect – all pieces of her latest case – she also finds herself tied up in a love triangle with an amber-eyed werewolf and a gorgeous vampire. Seduction meets determination as the stunning, part-vampire, part-werewolf protagonist uses her supernatural know-how to solve the multiple murder cases about to unfold. But she better hurry…since the killer has long since found her.

I have one copy to giveaway too!

Tell me what your favorite genre is.

Advertise this giveaway on any giveaway site and tell me where you advertised it. 10 Extra Entries
Subscribe to my blog
Follow me on twitter tell me your twitter ID
Blog or facebook about the giveaway include a link to me and to the sponsor for 10 extra entries
Tweet the giveaway (every time you tweet you get an entry) Link to the giveaway please!!!
Comment on any other non giveaway post and come back and tell me you did
Use any of the Share options at the bottom of this post: (two entries for each one)
Add my button/blog to your blogroll/friend list 3 extra entries

The contest will run until January 4th 11:59 pm Pacific. The winner will be selected by www.random.org. All rules can be found under giveaway rules.

Disclaimer: Compensation was provided by Amwell via Momtrends. The opinions … END_OF_DOCUMENT_TOKEN_TO_BE_REPLACED

Thank you to our partners who have sponsored our 2020 Tech The Halls Gift Guide! … END_OF_DOCUMENT_TOKEN_TO_BE_REPLACED

Thank you to our partner EaseUS for sponsoring this post! Now that so much of … END_OF_DOCUMENT_TOKEN_TO_BE_REPLACED

Thank you to our partner Skoove for sponsoring this post! My husband is a … END_OF_DOCUMENT_TOKEN_TO_BE_REPLACED

This is a sponsored guest post. As moms, for sure, many of you can relate to … END_OF_DOCUMENT_TOKEN_TO_BE_REPLACED

Thanks to VIZIO for providing their M-Series 65” SmartCast TV for review! Our … END_OF_DOCUMENT_TOKEN_TO_BE_REPLACED

Product sample provided. This is a guest post by Natasha Hendrix, Customer … END_OF_DOCUMENT_TOKEN_TO_BE_REPLACED

This is a sponsored guest post. As we move into a more digital age, we find … END_OF_DOCUMENT_TOKEN_TO_BE_REPLACED