You are here: Home / Archives for Milkshake 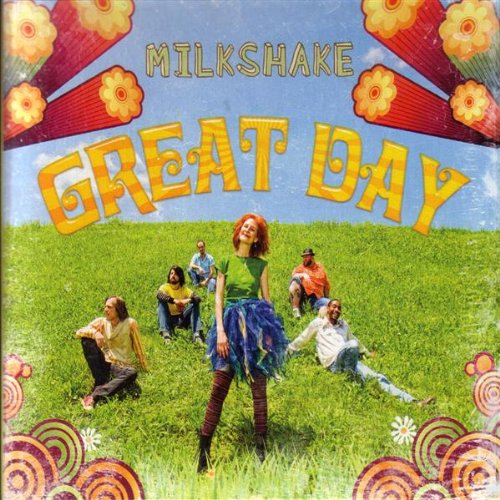 Here’s another great stocking stuffer music CD that has been added to my kids collection. We were sent Milkshake Great Day weeks ago to review and with all the hustle and bustle of our life it sort of missed my queue. Great Day

has been one of my favorite additions because of it’s childlike songs with a hippy hip type feel. Maybe I call it a Hippy type feel because it’s up and down and like a roller coaster traveling everywhere all at one time.

‘Great Day’ begins with a high-energy song, “Shake it Up.” With that, everything changes, having songs ranging from the Cajun-inspired “Statue of Me” to the alt-country “Enemies” and the fun, summertime “Dance in the Sun.” “When I’m Old,” featuring Cathy Fink on banjo, is part ode to Lisa Mathews’ mom and part “hey, wouldn’t it be fun to have a country song?” I mean it’s crazy jumping from genre to genre. “Recipe” was written with former Glenmont Popes front man Rodney Henry in mind. Henry, who owns Dangerously Delicious Pies in Baltimore, plays a Gretsch hollow body guitar on “Recipe”. Mandolin artistry by Marcy Marxer is displayed on “Travel Far;” the poignant lullaby, “I Love You,” written for Lisa Mathews’ nine-year-old daughter Jesse is also great. It’s soothing; and the title track’s ending jam, containing the band’s thoughts on what a great day should be. There are two different versions of the song, with the CD containing the shorter version. Milkshake’s Facebook and website friends will be able to download an 8-minute version, free of charge.

Great Day is Milkshakes fourth CD for kids and kids at heart. In keeping with the bands desire to grow with their own children, the songs on Great Day touch on issues of friendship, age, self-esteem, goals and desires among other things–things that matter to a 6 – 10 year old. In Milkshakes short seven years together, the band has released three award-winning CDs, a Parents Choice Silver Award for their DVD Screen Play, and had music videos on Noggin, PBS KIDS and Discovery Kids Emmy-winning ToddWorld. As Parents magazine says: If kids don’t push the replay button, parents will.

“A fizzy contemporary band that really rocks without losing sight of its target audience.”

“While many of Milkshake’s songs describe the world from a kids’ point of view, others are more like love letters from parent to child.” – The Washington Post

Disclaimer: Compensation was provided by Amwell via Momtrends. The opinions … END_OF_DOCUMENT_TOKEN_TO_BE_REPLACED

Thank you to our partners who have sponsored our 2020 Tech The Halls Gift Guide! … END_OF_DOCUMENT_TOKEN_TO_BE_REPLACED

Thank you to our partner EaseUS for sponsoring this post! Now that so much of … END_OF_DOCUMENT_TOKEN_TO_BE_REPLACED

Thank you to our partner Skoove for sponsoring this post! My husband is a … END_OF_DOCUMENT_TOKEN_TO_BE_REPLACED

This is a sponsored guest post. As moms, for sure, many of you can relate to … END_OF_DOCUMENT_TOKEN_TO_BE_REPLACED

Thanks to VIZIO for providing their M-Series 65” SmartCast TV for review! Our … END_OF_DOCUMENT_TOKEN_TO_BE_REPLACED

Product sample provided. This is a guest post by Natasha Hendrix, Customer … END_OF_DOCUMENT_TOKEN_TO_BE_REPLACED

This is a sponsored guest post. As we move into a more digital age, we find … END_OF_DOCUMENT_TOKEN_TO_BE_REPLACED