You are here: Home / Archives for Merlin

I’ve always been a fan of imaginative worlds that might have existed once upon a time; legends. Legends and folklore captivate my attention and one of the best legends around is the story of Camelot, King Arthur and the nights of the round table. Merlin a BBC America production has been viewable in America on one of my favorite channels, ScyFy. Merlin the Complete Second Season became available on DVD January 18th.

Merlin is about the forging of a strong relationship between the future King Arthur and his servant the warlock Merlin. In a land where magic is strictly prohibited, Merlin secretly uses it every day to protect the future of Camelot and his best friend Arthur. I watched Season Two and loved it! I was so happy to see the Lady Morgana finally embrace her path to the dark side. She is completely evil now in Season 3, oh wait, I’m getting ahead of myself but I can’t help myself because she is one of my favorite characters.

You’ll find that I enjoyed Merlin the Complete Second Season so much that I had an extremely difficult time waiting for Season 3 to begin. I know Merlin felt like he really couldn’t trust Morgana, but I almost feel that if he would have shared his secret with her, he would have saved the whole kingdom a lot of trouble. Just my 2 random cents there!!

Synopsis: Merlin is back with even more magic, adventure and romance as the young wizard struggles to protect Prince Arthur in the perilous world of Camelot. While battling deadly assassins, mystical monsters and the most powerful sorcerers Camelot has ever seen, Merlin must work harder than ever to conceal his unique abilities, as King Uther redoubles his war against magic. And Merlin isn’t the only one whose destiny calls—Lady Morgana , Uther’s ward, discovers dangerous secrets she dare not reveal; Lancelot returns, changing everything for both Gwen and Arthur; and King Uther fall in love, little knowing that the charming Lady Catrina is secretly a hideous troll. And as Arthur continues on his path from arrogant prince to the noble and just King Arthur of legend, we see the return of the one prophesized to kill him—the mysterious druid boy, Mordred. Featuring exciting new villains, white-knuckle stunt sequences, and spectacular CGI monsters, Merlin season two is more thrilling than ever.

I received a copy of Merlin The Complete Second Season from BBC for my unbiased review.

I have ended up with extra copies of a few movies and TV series that we greatly enjoy here as a family. I have three BBC America Titles, Hamlet, Merlin, and 30th Anniversary Spot. I also have two children’s DVD’s Care Bears in Share-a-Lot in Care-a-Lot from Lionsgate, and NoonBory & the Super7 from NCircle.

Enjoy the greatest performance of Hamlet. With David Tennant playing Hamlet and Patrick Stewart as The King and Claudius, what isn’t there to love. When I found out they were having this play in London, I wanted to grab the next flight to see it performed live. I can’t tell you how happy I was to see it be transformed into DVD for all to see. Watching this version made me understand things that I have never been able to understand before. Even my husband felt that the pentameter was perfect for dialogue. We’ve watched it twice together.

David Tennant and Patrick Stewart star in this critically acclaimed production of Shakespeare’s masterpiece from Britain’s renowned Royal Shakespeare Company.  No recent stage production in Britain has attracted the excitement and nearly unanimous critical praise as this Hamlet. Tennant’s interpretation was recognized as defining the role for a generation, and Stewart’s complex Claudius won the Olivier award, Britain’s highest stage honor. In this specially-shot screen version, filmed on location rather than in the theater, Tennant and Stewart reprise their roles. Dynamic, exciting and contemporary, it breathes new life into Shakespeare’s greatest play.

Another BBC America great TV series for those that love magic and mayhem because Arthur and Merlin are always in it. I’m really not sure how Merlin is going to keep his secret safe for any longer. He’s always using magic to save the day.

My children love Spot and what he’s getting into. In fact, when we went to the library we had to check out some Where’s Spot library books. I love that Where’s Spot was on Playhouse Disney, more people have a subscription to Disney than BBC America, we don’t have either right now so when Warner Brothers sent us a copy to review we were all quite ecstatic.

The 30th anniversary DVD of Where’s Spot has six episodes and what Miles loves is that every episode has a special song. My son loves to sing and when he gets a song in his head it’s a beautiful thing.

This April, the BBC celebrates the 30th anniversary of the ever-curious and always adorable puppy, Spot, with the DVD release – Where’s Spot? 30th Anniversary Edition. Based on the signature lift-the-flap children’s books by Eric Hill, the classic TV show – which aired on The Disney Channel’s Playhouse Disney preschool block – follows the adorable children’s icon on everyday adventures as Spot and his friends play at the park, take their first nature walk and splash around in a rain puddle. Where’s Spot? 30th Anniversary Edition boasts six endearing episodes with Spot voiced by Jonathan Taylor Thomas (The Lion King, Home Improvement), and each episode is accompanied by its own special song. Additionally, the DVD contains three bonus episodes in which the beloved puppy voiced by actor Hayley Joel Osment (The Sixth Sense, Pay it Forward), along with a reading of Where’s Spot by author Eric Hill and two interactive games. 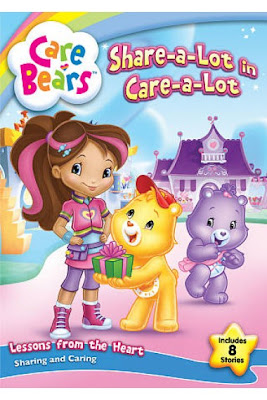 Learn some great lessons for children watching Care Bears: Share-a-lot in Care-a-lot from Lionsgate. See your favorite good guys like Share Bear, Grumpy Bear, and a not so nice friend Grizzle.

Join the Care Bears for eight wonderful tales filled with sharing and caring delight! Whenever it’s the Care Bears welcoming Grizzle, Share Bear helping Harmony overcome her fears on Surprise Day, or McKenna learning the joys of giving at a Giving Party, the Care Bears discover that warmth and kindness bring friendship and fun! Get ready to journey into Care-a-lot for more charming Care Bears adventures!

Watching Noonbory & The Super7 with my kids was at first very confusing, then I realized, I was just asleep. It’s not boring to the kids, they love it. So when I woke up I found that it’s teaching the kids about their senses. Touch, Smell, Taste, Sight and Hearing, each represent a different character and then you have Noonbory who seems to be their leader. Kids loved it.

When trouble is brewing or super silly villainy is taking place in the whimsical world of Tobalooba, it’s up to Noonbory and his sensational team of super-sensing problem solvers to save the day! Each of our superhero borys has a super sense, including sight, sound taste, touch, smell and of course, a little common sense and nonsense never hurts.

Each title listed above

Tell me what your favorite family movie is.

The contest will run until May 17th 11:59 pm Pacific. All rules can be found under giveaway rules.

I received these titles for my time in this post. All opinions expressed are my own.

My husband and I spent the last week watching Season 1 of Merlin. I’m a big fan of the King Arthur legend and even though Merlin, staggers in left field of the legends it is still quite an entertaining series. Merlin finds his way to Camelot, where Uthor Pendgraon is the reigning king. He has outlawed all use of magic and that is quite a complication for Merlin, the warlock. He finds it hard to become Prince Arthor’s friend but over time and through all the trials they both become great friends. Neither one is willing to admit it though, because how can a Prince and his servant become friends. That’s right, Merlin becomes Arthur’s servant as a reward for saving the Prince’s life.

What a pair these two are, also along for the journey is the lovely Lady Morgana who I’m sure is going to become evil and her servant Guenivere. Nothing is as it should be in this version of Arthur and Camelot, but if you have a heart for magic and knights, then you’re sure to love Merlin.

Tell me what you know about King Arthur.

The contest will run until May 10th 11:59 pm Pacific. All rules can be found under giveaway rules.

Warner Brothers sent us a copy of Merlin to review. They are also providing the prize.

Disclaimer: Compensation was provided by Amwell via Momtrends. The opinions … END_OF_DOCUMENT_TOKEN_TO_BE_REPLACED

Thank you to our partners who have sponsored our 2020 Tech The Halls Gift Guide! … END_OF_DOCUMENT_TOKEN_TO_BE_REPLACED

Thank you to our partner EaseUS for sponsoring this post! Now that so much of … END_OF_DOCUMENT_TOKEN_TO_BE_REPLACED

Thank you to our partner Skoove for sponsoring this post! My husband is a … END_OF_DOCUMENT_TOKEN_TO_BE_REPLACED

This is a sponsored guest post. As moms, for sure, many of you can relate to … END_OF_DOCUMENT_TOKEN_TO_BE_REPLACED

Thanks to VIZIO for providing their M-Series 65” SmartCast TV for review! Our … END_OF_DOCUMENT_TOKEN_TO_BE_REPLACED

Product sample provided. This is a guest post by Natasha Hendrix, Customer … END_OF_DOCUMENT_TOKEN_TO_BE_REPLACED

This is a sponsored guest post. As we move into a more digital age, we find … END_OF_DOCUMENT_TOKEN_TO_BE_REPLACED