You are here: Home / Archives for educational DVD

Welcome to the place where words come alive. Word World! Word World has become one of my favorite shows because it encourages the recognition of words. I’m sure my daughter can see that with all that she catches on to.  I was first introduced to Word World when I was at another Moms house. her kids were watching it and it was after I had been working on letters with my daughter. She said ‘e’ and there was an e. I was so excited, she was only 2 years old and recognized the letter. Wow, the same story every time I watch a word world video.

This Word World DVD comes with two different episodes.  Both are sure to get everyone in the mood for Valentine’s Day! 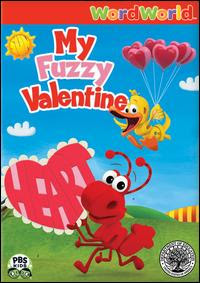 When SHEEP decides she wants to make a special Valentine song for her pal BEAR, she runs into trouble finding the perfect rhyme and makes BEAR a Valentine song with real heart.

BUG wants to sign a Valentine for his favorite WordFriend, but he doesn’t know how to write his name. With lots of encouragement from FROG he learns that with a little practice, he can write his name.

My favorite out of the two was watching My Fuzzy Valentine. It was really cute watching sheep try to come up with just the right rhyme and we used this opportunity to start teaching Zoe how to rhyme.

NCircle was kind enough to send us a copy of  My Fuzzy Valentine dvd it retails for only 5.99 US$. (I think this is a great price for this educational show).  A Department of Education funded study has shown that WordWorld improves a child’s literacy skills.

Thanks to NCircle Entertainment we were sent My Fuzzy Valentine, one of the newer WordWorld releases…just in time for Valentines day!

The true testament of how well your High Definition TV screen will look can be found by playing a nature video and I can honestly say, not just any nature video. We recently purchased Disney’s Earth on Bluray and were pleased with the quality and impressed with out TV. We were never able to experience the HD experience except with our own home movies and the lighting was never good enough to see it. Then a few weeks later, Warner Brothers sent me a review copy of Yellowstone. WOW.

America’s first National Park, Yellowstone, is one of the most spectacular wildernesses on Earth and home to some of the richest wildlife beyond the plains of Africa.  Yellowstone: Battle for Life reveals the beauty and struggles of this amazing natural treasure.  A must-own documentary for nature enthusiasts everywhere, the release contains three hour-long episodes that encompass nearly an entire year at Yellowstone National Park, as well as 30 minutes of behind-the-scenes special features.

The DVD is broken up into three episodes, which are the three seasons that Yellowstone has. I learned that there really is no fall because the winter is so long and hard. Spring is barely existent as well but it is when all of the animals are able to procreate. My husband and I were glued to the TV while we watched in amazement how colorful Yellowstone really is. It’s hard to believe that something that beautiful exists in the United States. I learned a lot of historical information and was never bored.

The Druid Peak wolves are adept hunters in the depths of harsh Yellowstone winters, proving agile enough to defeat a fully-grown buffalo.  However, with spring approaches crisis for this group as rival wolf packs and hungry bears emerging from hibernation jeopardize their survival.

As the new life of spring emerges so does the grizzly bear mother with her cubs.  She is on the prowl to find nourishment to feed her growing family, but she must compete for their survival with packs of wolves and coyotes as well as the ever-looming bald eagles.

Experience the splendor as herds of buffalo, elk and moose gather by the thousands across the plains of Yellowstone.  BBC reveals the intensity of the fighting between bulls that is often so brutal it ends in severe injury and even death, as Yellowstone’s inhabitants prepare for the return to winter once again.

Disclaimer: Compensation was provided by Amwell via Momtrends. The opinions … END_OF_DOCUMENT_TOKEN_TO_BE_REPLACED

Thank you to our partners who have sponsored our 2020 Tech The Halls Gift Guide! … END_OF_DOCUMENT_TOKEN_TO_BE_REPLACED

Thank you to our partner EaseUS for sponsoring this post! Now that so much of … END_OF_DOCUMENT_TOKEN_TO_BE_REPLACED

Thank you to our partner Skoove for sponsoring this post! My husband is a … END_OF_DOCUMENT_TOKEN_TO_BE_REPLACED

This is a sponsored guest post. As moms, for sure, many of you can relate to … END_OF_DOCUMENT_TOKEN_TO_BE_REPLACED

Thanks to VIZIO for providing their M-Series 65” SmartCast TV for review! Our … END_OF_DOCUMENT_TOKEN_TO_BE_REPLACED

Product sample provided. This is a guest post by Natasha Hendrix, Customer … END_OF_DOCUMENT_TOKEN_TO_BE_REPLACED

This is a sponsored guest post. As we move into a more digital age, we find … END_OF_DOCUMENT_TOKEN_TO_BE_REPLACED