You are here: Home / Archives for discount

I used to think there wasn’t anything behind salon products, but I was kidding myself seriously. When I won a salon quality blow dryer on twitter last year, the only thing I could think about was I would never spend that much on a hair dryer or any hair product in my life, but let me tell you. I love my hair dryer, the same thing applies to salon quality hair brushes. I love having my hair brushed at a salon. I love having my hair brushed period but at a salon my hair never gets caught up in a tangle.

And have you ever been able to duplicate the hair style your stylist at the salon gave you?

Brushlove believes that the quality behind the tool gives you the awesome hairstyle and they are giving away a lifetime supply of brushes on Facebook. Brushlove is randomly selecting 5 winners on August 30th, 2011 to win a LIFETIME supply of hair brushes!  The winners will have the luxury to pick out a Brushlab brush that they feel would be the best fit for their specific hair type and also receive a new brush every year for the rest of forever.

All you have to do is Like Brushlove on Facebook. Then on August 30th they will randomly pick 5 winners.

(giveaway is not held on this site, it’s only by liking  Brushlove on Facebook that you are entering.)

To Save 20% store wide at Brushlove:

Haven’t herd of the Litl, read my Litl Review if you want more information about the litl, visit litl. It’s fun piece of technology and a great net book. If all you do is use the internet this is the machine for you.

$100 discount on the litl webbook, simply visit www.litl.com/momdeal.  This $100 promotion is available until the end of June. The total cost will be 299.00. Seems like a great price!

I have the unique opportunity to offer you a discount on Tickets to Disney Live: Rockin Road Show. My daughter is watching me post this post and saying, I want to watch it, like I can instantly put a live show on. 😉 Silly girl. But Disney has that kind of magic that makes us all feel young and happy.

The show will be at Comcast Arena at Everett. The discount is 4 tickets for $44 in either the $26 seats or the $19 seats. This discount is valid for all performances, and is available at the box office, internet, outlets and phones. The promo code is BLOG. This promotion runs until January 31

“Get ready to dim the lights and raise the curtain – Mickey Mouse is in the house and he’s setting the stage for fun – just for you! But first he’ll need to find some amazing acts to put in his show. Mickey, Minnie, Goofy and Donald all head off on an adventure and find some great friends to help them out. You’ll get to sing along to cool songs, jump out of your seat to dance to the beat and laugh out loud with Buzz and Woody from Toy Story, Cinderella, Tigger, and more of your Disney friends at this show-stopping, zany, on-stage adventure coming right to your hometown!”

Head over to http://www.thesak.com/ between today and 11/30 and receive 20% off your next purchase just by signing up for our mailing list.  Simply enter your email in the bottom, right corner and a promo code will be emailed to you.

Head over to http://www.elliottlucca.com between today and 11/30 and receive 20% off your next purchase just by signing up for our mailing list.  Simply enter your email in the bottom, right corner and a promo code will be emailed to you.  Happy Shopping!

Both websites say the discount is only for 10% but go ahead and request one, there should be blogger option, or reader of blogger, and then you get 20% instead.

Elliott Lucca and The Sak are proud supporters of Mom Start. They make a donation once a year to charity through this blog.

For this weekend only if you are purchasing nursing bras you can save 25 percent off of your entire purchase. Use the code

I had the fortunate opportunity to work with Atari recently and they sent me a copy of Ready 2 Rumble Revolution for the Wii. 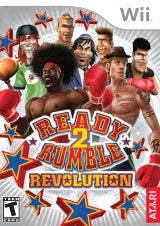 The game has the voice Michael Buffer who is famous for “Let’s Get Ready to Rumble®” trademark call. (which is one of my favorite parts, it really brings the came a lot of character. The characters are brought to life with hilarious moves, detailed facial animations (also something I really enjoyed), damage textures and fighting techniques including special moves, combos, extreme knockdowns and special “Rumble” combos (I would only get these by accident).  An all new Championship Mode lets gamers create their own unique boxer and nurture (this was one of the first things I did) his skills through mini-games, developing him as a fighter and creating a completely personalized Ready 2 Rumble Revolution experience.

Key Points of the Game:

Intuitive Gameplay – Using the Nunchuk controller as one glove and the Wii Remote as the other, players dodge, weave and punch their opponents. The controller’s speaker and rumble device provide sensory feedback.
18 Wildly Caricatured Boxers – A new roster of caricatured boxers presents parodies of celebrities from the world of sports, music and movies. Highlights include the caricature of Michael Buffer, “The Voice of Champions™”, and his famous “Let’s Get Ready to Rumble®” trademark call. Each character is brought to life through hilarious over-the-top moves, improved facial animations and damage textures.
Special Moves – Tons of outrageous special moves, combos and extreme knockdowns enhance the fighting experience while “Rumble“-Combos enable players to pull off moves from Kung Fu, Wrestling and other martial arts.
Contains 8 Modes of Play – Arcade, Quick Fight, Team Fight, Tournament, Championship, Mini Game, Tutorial and Create a Boxer modes
Championship Mode – The all new championship mode allows players to create their own boxer and nurture his skills through mini-games developing him as a fighter.
Single-Player AI – R2R Revolution can be played multi-player or single-player. In single player mode, AI allows for more strategy-oriented fighting experience and adds to replay value

I found this video game to be quite a work out. I haven’t played it a lot, it’s not exactly the game I thought it would be. I was hoping that I would be able to create a female boxer. I’m sure if I had read the description better I would have found that out in the beginning. Looking at it from the standpoint of the Wii’s graphics sucks, Atari did an excellent job making their characters. The characters look like boxing figures and they made great use of the Wii controller, it feels like just the slightest difference is a different hit. It also has no response difficulty like some of the other Wii games I have played. The tutorial teaches you how to use the remote and make different kinds of punches; while at the same time,  you can exit the tutorial at any point. I hate games that make me do the tutorial. I did get a huge kick out of how the characters looked after being hit. Ka pow!

I also found it fun and humorous to play. Thank You atari. You are welcome on my blog at any time.

Disclaimer: Compensation was provided by Amwell via Momtrends. The opinions … END_OF_DOCUMENT_TOKEN_TO_BE_REPLACED

Thank you to our partners who have sponsored our 2020 Tech The Halls Gift Guide! … END_OF_DOCUMENT_TOKEN_TO_BE_REPLACED

Thank you to our partner EaseUS for sponsoring this post! Now that so much of … END_OF_DOCUMENT_TOKEN_TO_BE_REPLACED

Thank you to our partner Skoove for sponsoring this post! My husband is a … END_OF_DOCUMENT_TOKEN_TO_BE_REPLACED

This is a sponsored guest post. As moms, for sure, many of you can relate to … END_OF_DOCUMENT_TOKEN_TO_BE_REPLACED

Thanks to VIZIO for providing their M-Series 65” SmartCast TV for review! Our … END_OF_DOCUMENT_TOKEN_TO_BE_REPLACED

Product sample provided. This is a guest post by Natasha Hendrix, Customer … END_OF_DOCUMENT_TOKEN_TO_BE_REPLACED

This is a sponsored guest post. As we move into a more digital age, we find … END_OF_DOCUMENT_TOKEN_TO_BE_REPLACED