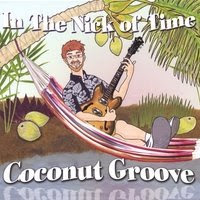 I have a new favorite Children’s CD. In The Nick of Time is fun to listen to and I do not get annoyed like I do when we listen to one of the other’s which for now I will be kind enough not to mention.
In The Nick of Time has 13 songs that we like to sing and dance to. It was so much fun and my kids enjoyed it. Miles does this bouncy thing when he likes something. He’s been bouncing since he was inside me, now he’s dancing to the Coconut Groove. The first time we listened to it my daughter was building with her legos. The Hang with me song came on and she started getting her little groove on while still building her structure. I have such talented kids.
About Nicholas Deysher:

As long as he can remember, Nick Deysher has been making music. After
earning a BA in Jazz Composition at Bates, the Massachusett’s native began
sharing his love of music with children as a preschool teacher. The children in
his class enjoyed his music so much, parents began asking Deysher for a CD. In
2001, Nick released his first children’s album, One Man Band. His blend of
musical styles and genres became an instant hit.

Not only is he a high energy entertainer he is generous as well. He has donated his CD to Bloggers Give. I asked him, and he said consider it done. I’m very proud to share his music with you.
To enter:
Visit In The Nick of Time and sample his music, tell me what you like.
For Extra Entries:
Subscribe to my blog
Follow me on twitter tell me your twitter ID
Blog about the giveaway for three extra entries
Advertise on my EC for three extra entries
Tweet the giveaway
Leave a comment for every entry and the giveaway ends April 1st.

This is a sponsored guest post. As moms, for sure, many of you can relate to … END_OF_DOCUMENT_TOKEN_TO_BE_REPLACED

Thanks to VIZIO for providing their M-Series 65” SmartCast TV for review! Our … END_OF_DOCUMENT_TOKEN_TO_BE_REPLACED

Product sample provided. This is a guest post by Natasha Hendrix, Customer … END_OF_DOCUMENT_TOKEN_TO_BE_REPLACED

This is a sponsored guest post. As we move into a more digital age, we find … END_OF_DOCUMENT_TOKEN_TO_BE_REPLACED

This is a sponsored guest post. Last year a 16-year-old from Pennsylvania … END_OF_DOCUMENT_TOKEN_TO_BE_REPLACED