You are here: Home / review / Fruit Jerky by Jerky

I never thought of dried fruit as Jerky until Jerky.com sent me some Pineapple Jerky. Since Jerky is just dried meat, dried fruit is jerky.

Jerky is essentially the drying of a meat product for either immediate or future consumption. With this method of preservation, the normal processes that would render meat inedible (bacterial growth and fungal contamination) are held at bay, keeping the food safe for consumption for an extended period of time. This method has been around for centuries and has long been the preferred process of preserving meat products (as opposed to freezing or using chemical treatments). 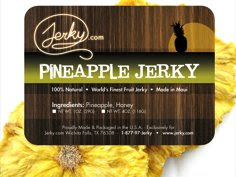 The Pineapple Jerky that was sent to me was extremely juicy for being dried fruit. I love pineapple, but they can be so messy and it’s a pain to have a knife ready for chopping one up. I have looked for dried Pineapple before, especially when I was pregnant. I had the hugest craving for it. I sent my husband out looking for it once and he even went to Whole foods and couldn’t find it. Yes, he found some but not specific to my instructions. I wanted some that was not covered in sugar. Why do companies feel that they need to dump dried fruit in sugar I will never know. We finally tracked some down at Trader Joes but I found it very difficult to chew. It satisfied my craving but I ended up throwing most of it away because I was tired of chewing it. Jerky’s jerky is so easy to chew for jerky. I am very pleased with my sample of jerky. I hope they send me more, or I’ll just have to order some.

My husband loves the venison jerky. That will have to be something I might consider purchasing some time. I did eat a ton of  Beef Jerky while I was pregnant too. It was a great way for me to get protein without a whole lot of calories. Also, with my first pregnancy we had a power outage for a whole week. So it was either peanut butter or jerky. And what would be great for dads on Father’s Day? Beef Jerky Gift Baskets right?

Thank you to our partner EaseUS for sponsoring this post! Now that so much of … END_OF_DOCUMENT_TOKEN_TO_BE_REPLACED

Thank you to our partner Skoove for sponsoring this post! My husband is a … END_OF_DOCUMENT_TOKEN_TO_BE_REPLACED

This is a sponsored guest post. As moms, for sure, many of you can relate to … END_OF_DOCUMENT_TOKEN_TO_BE_REPLACED

Thanks to VIZIO for providing their M-Series 65” SmartCast TV for review! Our … END_OF_DOCUMENT_TOKEN_TO_BE_REPLACED

Product sample provided. This is a guest post by Natasha Hendrix, Customer … END_OF_DOCUMENT_TOKEN_TO_BE_REPLACED

This is a sponsored guest post. As we move into a more digital age, we find … END_OF_DOCUMENT_TOKEN_TO_BE_REPLACED

This is a sponsored guest post. Last year a 16-year-old from Pennsylvania … END_OF_DOCUMENT_TOKEN_TO_BE_REPLACED