Racing games are my favorite kind of video games, always have been and always will be. I just love racing around the track and Ben 10 Galactic Racing brings a new fun adventure to the screen with the Omnimatrix of changing characters and powers. It’s like Mario Kart in a way but at the same time different. It’s Ben 10 and you can play as either Ben, Kevin or choose from 13 fan-favorite aliens. BEN 10 Galactic Racing presents the ultimate racing experience, where every character has a special ability to utilize on the race track and even Ben can transform into different aliens mid-race!  We played this as a family one night. Zoe against dad, mom against Miles and Zoe against Miles and Dad against Mom. We just kept taking turns until our hands hurt. It was a fun family night in. I had a great time playing and loved using my power ups to make my husband crash! Yep, I’m that kind of wife.

Every one thousand years, the Galvan alien species holds a celebration in space, where aliens from all over the galaxy attend a high-speed race. In BEN 10 Galactic Racing, players will compete as Ben himself, or choose from 15 fan-favorite aliens, in the Galactic Grand Prix Race that takes place in more than 25 exhilarating and challenging grand-prix tracks spread across five different planets from the BEN 10 universe.

This fast-paced and interstellar racer is coming this Fall to PS3, PSP, Xbox 360, Nintendo DS, Nintendo 3DS and Wii. 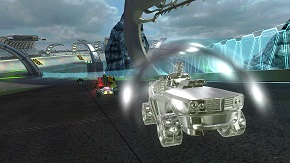 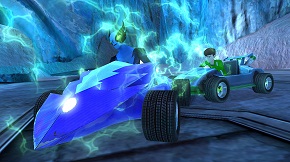 Our only complaint would be that the Xbox 360 gamer points are only available in single person mode. It’s quite a bit of fun earning gamer points. It’s one of my husband’s main objectives when he’s playing a game.

This giveaway has ended. Congratulations to the winner, Nicole Edwards.

All rules can be found under giveaway rules.

Thank you to our partner EaseUS for sponsoring this post! Now that so much of … END_OF_DOCUMENT_TOKEN_TO_BE_REPLACED

Thank you to our partner Skoove for sponsoring this post! My husband is a … END_OF_DOCUMENT_TOKEN_TO_BE_REPLACED

This is a sponsored guest post. As moms, for sure, many of you can relate to … END_OF_DOCUMENT_TOKEN_TO_BE_REPLACED

Thanks to VIZIO for providing their M-Series 65” SmartCast TV for review! Our … END_OF_DOCUMENT_TOKEN_TO_BE_REPLACED

Product sample provided. This is a guest post by Natasha Hendrix, Customer … END_OF_DOCUMENT_TOKEN_TO_BE_REPLACED

This is a sponsored guest post. As we move into a more digital age, we find … END_OF_DOCUMENT_TOKEN_TO_BE_REPLACED

This is a sponsored guest post. Last year a 16-year-old from Pennsylvania … END_OF_DOCUMENT_TOKEN_TO_BE_REPLACED