I was sent GX Racers 360 Spinway from JAKKS Pacific to review on Mom Start. I liked it so much that I have added it to my Christmas Gift Guide for 2009.  It reminds me of another toy that runs on track only. This one shoots off and runs on any surface because it goes so fast. It’s a big treat for boys little and big (dad’s). My son just absolutely loves cars, all cars and trucks or anything that goes weeeeeee. GX Racers fall into that category. 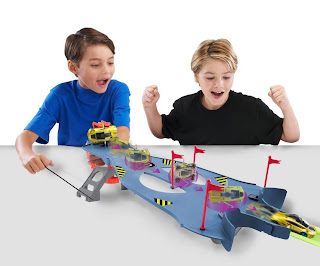 All of the cars, skateboards and other items they make for the Spinway are powered by GX GYROS which can race up to 600 scale MPH. There’s another WOW.

I did a very careful review of the 360 Spinway from JAKKS Pacific so that I could donate it for Christmas to my MOMS Club. We’re collecting items for quite a few different charities from now until the end of the year. In January we’ll be doing Birthday packs for the Food Bank.

GX Racers offer many more products. They have a super cool GX Turbo Launcher for even faster speeds, the GX Super Jump with over 7 ft of track and the GX Skate toys that provide hours of amusement as children re-create different skate tricks.

Thank you to our partner Skoove for sponsoring this post! My husband is a … END_OF_DOCUMENT_TOKEN_TO_BE_REPLACED

This is a sponsored guest post. As moms, for sure, many of you can relate to … END_OF_DOCUMENT_TOKEN_TO_BE_REPLACED

Thanks to VIZIO for providing their M-Series 65” SmartCast TV for review! Our … END_OF_DOCUMENT_TOKEN_TO_BE_REPLACED

Product sample provided. This is a guest post by Natasha Hendrix, Customer … END_OF_DOCUMENT_TOKEN_TO_BE_REPLACED

This is a sponsored guest post. As we move into a more digital age, we find … END_OF_DOCUMENT_TOKEN_TO_BE_REPLACED

This is a sponsored guest post. Last year a 16-year-old from Pennsylvania … END_OF_DOCUMENT_TOKEN_TO_BE_REPLACED