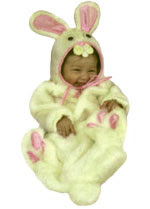 Well, Annie’s Costumes has agreed to do a giveaway almost every month. YEAH!!!!!!
Lets all say thank you!

THANK YOU!!
Mardi Gras just happened right? Still going on? I’m really not very sure about Mardi Gras and all the details.
That is the beauty of the Internet right?

While not observed nationally throughout the United States, a number of cities
and regions in the country have notable celebrations. Mardi Gras arrived in
North America as a sedate French Catholic tradition with the Le Moyne
brothers,[13] Pierre Le Moyne d’Iberville and Jean-Baptiste Le Moyne de
Bienville, in the late 17th century, when King Louis XIV sent the
pair to defend France’s claim on the territory of Louisiane, which included what are now the
U.S. states of Alabama, Mississippi, and Louisiana.[13]
The expedition, led by Iberville, entered the mouth of the Mississippi
River on the evening of March 2, 1699, Lundi Gras, not yet knowing it was the river 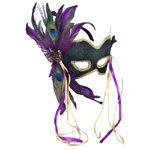 explored and claimed for France by René-Robert Cavelier,
Sieur de La Salle in 1683. The party proceeded upstream to a place on the
west bank about 60 miles downriver from where New Orleans is today, where a small tributary
emptied into the great river, and made camp. This was on March 3, 1699, Mardi
Gras day, so in honor of this holiday, Iberville named the spot Point du Mardi Gras (French:
“Mardi Gras Point”) and called the small tributary Bayou Mardi Gras. Bienville went on to found
the settlement of Mobile, Alabama in 1702 as the first capital of French
Louisiana,[14] and in 1703 the
Mardi Gras tradition began with celebrations by the French settlers in that
city.[13][15][16] By 1720, Biloxi had been made capital of Louisiana.
The French customs were introduced there at that time.[13] In 1723, the capital of Louisiana was moved
to New Orleans, founded in
1718.[14] The tradition there
expanded to the point that it became synonymous with that city, and closely
associated with the slogan Laissez les bon temps rouler and
the nickname Big
Easy.[13] In more recent times
several other U.S. cities without a French Catholic heritage have instituted the
celebration of Mardi Gras.

This was taken from Wikipedia.
So, Mardi Gras is over but the fun doesn’t have to be. Do you like party masks? I do, of course, I told you in my last Annie’s Costume giveaway that I love costumes. I have this beautiful dress that my grandmother made for me. She made the top bodice piece of the dress completely by hand. It is beautiful. She cursed me and said she would never make me another dress again, (she still loves me) It was a lot of work, anyways, I love to wear a mask with it. In the past 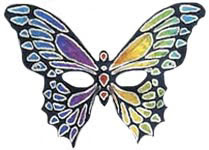 I made one by hand, so i would have loved to have gotten a mask from Annie’s Costumes.
You can win one! That’s right, you can win one. I recommend you pick out your Easter costume while you are there. They have the cutest baby bunny outfits and some of them are on sale.
To Enter:
Visit Annie’s Costumes and pick out the mask you would like.
Extra Entries:
Add my button to your blog
Blog about this giveaway for three extra entries
Subscribe to my blog
Tweet the giveaway
Subscribe to Annie’s costumes’ Newsletter. two extra entries
Please leave a comment for every entry contest ends March 31..
******the prize will be from a list that is sent to you after you are selected as a winner. You will get to pick from 10 to 15 different masks that are in stock and not special order***************

Thank you to our partner EaseUS for sponsoring this post! Now that so much of … END_OF_DOCUMENT_TOKEN_TO_BE_REPLACED

Thank you to our partner Skoove for sponsoring this post! My husband is a … END_OF_DOCUMENT_TOKEN_TO_BE_REPLACED

This is a sponsored guest post. As moms, for sure, many of you can relate to … END_OF_DOCUMENT_TOKEN_TO_BE_REPLACED

Thanks to VIZIO for providing their M-Series 65” SmartCast TV for review! Our … END_OF_DOCUMENT_TOKEN_TO_BE_REPLACED

Product sample provided. This is a guest post by Natasha Hendrix, Customer … END_OF_DOCUMENT_TOKEN_TO_BE_REPLACED

This is a sponsored guest post. As we move into a more digital age, we find … END_OF_DOCUMENT_TOKEN_TO_BE_REPLACED

This is a sponsored guest post. Last year a 16-year-old from Pennsylvania … END_OF_DOCUMENT_TOKEN_TO_BE_REPLACED